I don’t want to jinx anything by saying that After Life, the Ricky Gervais dramedy on Netflix, just my be my favorite piece of entertainment this year. But it is.

I even went so far as to say to my friends and family recently that if they didn’t watch and love After Life as much as I did, then we probably won’t ever like the same kind of entertainment.

Even if you don’t love Ricky Gervais (he tends to make really amazing or really not-amazing content), this short series (six 30-minute episodes) will make you laugh and make you cry, or at least tear up. It’s a sweet sobering story about how a man comes to terms with life after the death of his wife.

Reading through some of the best quotes from After Life reflect the humor and poignancy that make this show so great.

Best Quotes from After Life

“What?! He is not a fat, hairy, nosy cocksucker. Bad girl, Brandy. Sorry about that.”
– Tony talking to his dog after a man “reminded” him that his dog should be on a lead

“I’m not a pedo and if I was, you’d be safe you tubby little ginger cunt.”
– Tony to the little boy at school who randomly calls him a pedo

“Hardly scarred for life. She’s 93. If she lives to 100, she’s only been scarred for 7% of her life.”
– Tony to the newsstand clerk about a recent elderly mugging

“If I become an asshole and do and say what the fuck I want for as long as I want, and then when it all gets too much, I can always kill myself. It’s like a superpower.”
– Tony, explaining his outlook on life since his wife died

“I have emergency snack nearby, yeah.”
– Lenny, when Tony asks and assumes that he must eat in bed

“Nothing’s as good if you don’t share it.”
– Local man who received five of the same birthday card

“You get a lovely little handful of his neck. Like a pug.”
– Tony, using Lenny as his human stressball

“Why would people rather be famous for being shit than not be famous at all?”
– Tony, after visiting the boy could could play the double nostril recorder

“At first I thought, “I’ll give him the benefit of the doubt” because I just assumed that you were always having a bad day but maybe it’s just because you’re a cunt.”
– The nurse at the facility who takes care of Tony’s dad

“I’d rather be nowhere with her than somewhere without her.”
– Tony, confessing his feelings to Anne at the cemetery

“Hi. I’m Tony. I don’t want to appear ageist but are those your own teeth?”
– Tony, when practicing for dating with a much older Anne at the cemetery

“We’re not just here for us. We’re here for others. All we’ve got is each other. We’ve got to help each other struggle through til we die and then we’re done.”
– Anne at the cemetery providing sage words to Tony

Matt: “Indian okay?”
Tony: “Yeah, I don’t care what she is.”
Matt: “No, I meant food!”
– Tony talking to his brother-in-law Matt when finally agreeing to a blind date

“I’m an escaped lunatic and I like murdering little fat kids, like you.”
– Tony when talking to the little ginger Robbie at the school

“Sit on him, grab the roll of fat on the back of his neck and blump him round the room like a big space hopper.”
– Tony, giving suggestions to Lenny’s new girlfriend

Tony: “Change the subject!”
Housewife: “So, for the bread, I use my own vaginal yeast.”
When Tony and Lenny visit a housewife who uses her own breast milk to create desserts

“I wanted to punch a bloke in the cafe yesterday for yawning too loudly. It’s like celebrating being tired.”
– Tony, talking to his psychiatrist about the level of anger he walks around with

“Happiness is amazing. It’s so amazing it doesn’t matter if it’s yours or not.” – Anne, sharing words of wisdom at the cemetery

“A society grows great when old men plant trees, the shade of which they know they’ll never sit in.”
– Anne, talking to Tony at the cemetery

Tony: “You could draw a mustache on any baby and it looks a bit like Hitler.”
Young mother: “Not a black one. Not as much.”
– when Tony visits a local couple who claim their baby looks exactly like Hitler

“Well, I think life is precious because you can’t watch it again. I mean you can believe in an after life if that makes you feel better but once you realize you’re not going to be around forever, I think that’s what makes life so magical.”
– Tony having a moment of sincerity with Kath in the office

“I’d rather live missing him than for him to live missing me. That’s how much I love him.”
– Anne explaining why she’s happy despite losing her husband

Matt: “It’s bad for you.”
Tony: “Everything’s bad for you. We’re all dying. Being healthy is just dying more slowly.”
– Matt trying to convince Tony to stop drinking.

Did you find your favorite quote from the show? Or did you laugh again reliving moments from the show? I’ve already watched After Life twice and plan to watch it again. It’s THAT good.

And if we missed one of your favorite quotes from After Life, be sure to share it below! 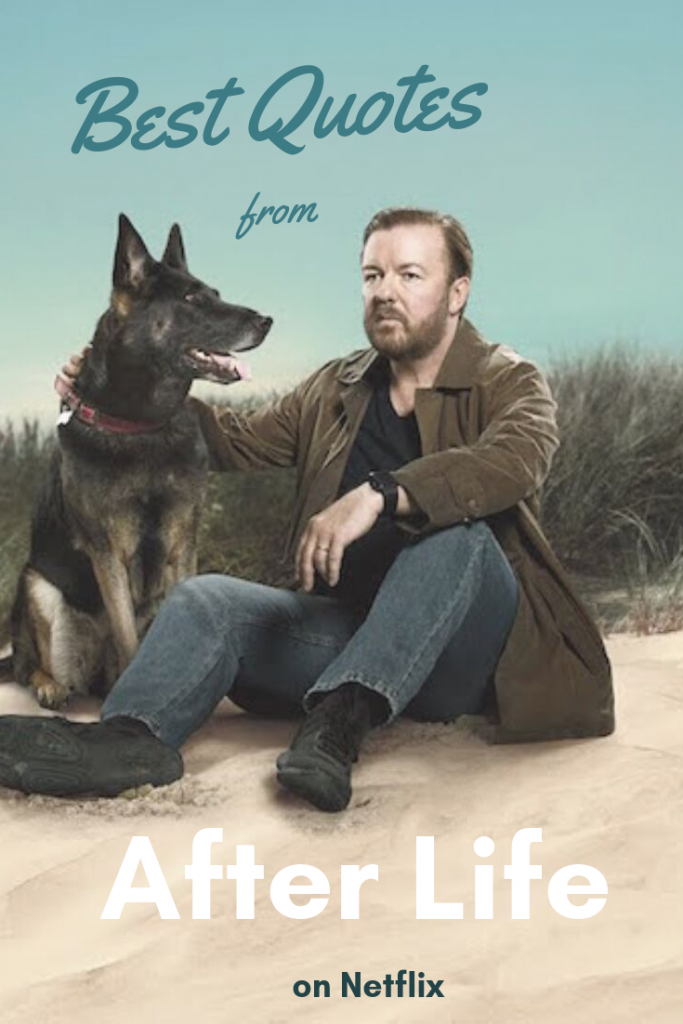