If you’re like me, you’re stuck at home and wisely using that time to explore new and exciting television shows like Tales from the Loop now streaming on Amazon Prime Video. If you’re like me, you also sat through all eight long episodes waiting for the big payoff. And it never came.

This is what’s having me scratch my head wondering not only what did I just watch but also why did I just watch it. If you’re feeling as confused as I am, let’s see if we can work it all out.

Where did Tales from the Loop come from?

Well, this is a first for me. It’s not based on a book. It’s based on the artwork of Swedish artist Simon Stålenhag. Having grown up in Stockholm, his work “often combines his childhood with themes from sci-fi movies, resulting in a stereotypical Swedish landscape with a neofuturistic bent.”

And that’s actually a pretty good description of the setting for Tales from the Loop. But where did the actual story come from?

The artwork inspired two art narrative books called, Tales from the Loop and Things from the Flood. Both are focused on a particle accelerator nicknamed The Loop.

In 2016, two years after the book was published, a table-top role-playing game was created called, as you might have guessed, Tales from the Loop.

Amazon Studios created an adaption in the form of eight episodes which were released on Prime Video on April 3, 2020.

What is Tales from the Loop supposed to be about?

Tales from the Loop explores the town and people who live above “The Loop,” a machine built to unlock and explore the mysteries of the universe – making things possible that were previously relegated only to science fiction. In this fantastical mysterious town poignant human tales are told that bare universal emotional experiences while drawing on the intrigue of genre storytelling.

However, you need to know this going into the series because they never make it entirely obvious what The Loop is, how it got there, why it’s there, and what it does.

After watching all eight episodes, it’s clear that the show is dealing with an unknown technology, time travel, and the very existence of being. So if you’re looking for something light and fluffy, fast-paced and engaging, and full of clarity, this is not that show.

Tales from the Loop Episode Breakdown

Each episode could technically be a standalone episode. Tales from the Loop is an anthology of sorts but all of the stories are interconnected in some way. And note that the majority of the show is set in a dark, dingy version of the 80s. No neon here.

With that said, here’s a quick recap of each episode. You may see SPOILERS as I’ll be mentioned a few head scratchers from the episode.

Welcome to The Loop. An underground facility where everyone in town seems to work and it looks an awful lot like part of Star Labs from “The Flash.” A young girl named Loretta is mysteriously transported from her disinterested mother’s house into what appears to be the same world many years in the future where she meets… herself.

She is now a married, somewhat disinterested mother of two and she reassures herself that her life will get better before she returns to her own time., we think. The episode never really makes clear what happens. One of many holes throughout the episodes.

Loretta’s son, Jacob, and his friend Danny explore in the woods and find a orb-shaped capsule that allows them to switch consciousness with each other. It’s a fun prank until Danny doesn’t want to switch back. Jacob returns to the orb only to find that his consciousness swaps with a nearby (?) robot.

No real time travel involved here but it does the idea that a consciousness can be separate from a body.

What if you could stop time? That becomes the plight of the new Jacob’s girlfriend, May. With a special device, everything on Earth stops except for May and her love interest by way of special bracelets.

It’s a definite throwback to the Twilight Zone episode, “A Kind of a Stopwatch” but doesn’t seem to tie back into the overall story in any way. And there’s lots of sex in this episode.

Yet another orb exists in the landscape of this odd town that treats an echo like a tree ring. When calling into the orb, the number and sound of echoes reflect the future that’s left for an individual. It’s here that Jacob’s brother, Cole, learns that his grandfather has no more echoes left.

The story centers on the existential meaning of time and existence.

Meanwhile, back at Danny’s house, his father becomes obsessed with the idea of protecting his family and enlists the aid of a worker robot. It’s another oddball episode that really only sheds light on the fact that the new Jacob (formerly Danny) still misses his younger sister.

May is back in a brief stint to help The Loop security guard, Gaddis, fix an abandoned hover tractor. (Wait – whose tractor is this? How does it hover? What is that weird hole in the ground?)

Upon starting the tractor, he’s transported to a parallel world where he meets… himself! Only here he’s living the life he only dreams of. As far as we know, he never returns to his own world. So there’s that.

Here we get the backstory for Loretta’s husband, George. As a child, he’s abandoned on a forbidden island by his “friends” and he spends the worst night of his life. He later realizes that the island is home to his father’s first major AI invention who is now living out his existence in solitude.

This episode tries to wrap up the major story points. Jacob reveals to his younger brother, Cole, that he’s really Danny and that the real Jacob is actually in a robot living in the woods. Cole finds Robot Jacob but he dies in a robot fight and Cole accidentally steps across a time stream and loses 20 years of his life.

He returns to The Loop to find his mother is much older, his father has passed away, and his brother is now living as Danny. We then go further into the future and see Cole as a man with his wife and son returning to his childhood home. Completing the loop? Maybe.

Overall Thoughts on Tales from the Loop

The acting is great. The cinematography is great. But it feels more like art than entertainment.

The episodes are long and slow. The story, while often interestingly told, often feels pointless because we just don’t have any of the context of what The Loop is, why it’s there, and what it does.

I recognize that great entertainment doesn’t need to spoon feed you along the way but it at least needs to drop a few breadcrumbs.

Check out our full coverage of the Black Mirror sci-fi anthology series and our take on the Prime Video original, Homecoming. 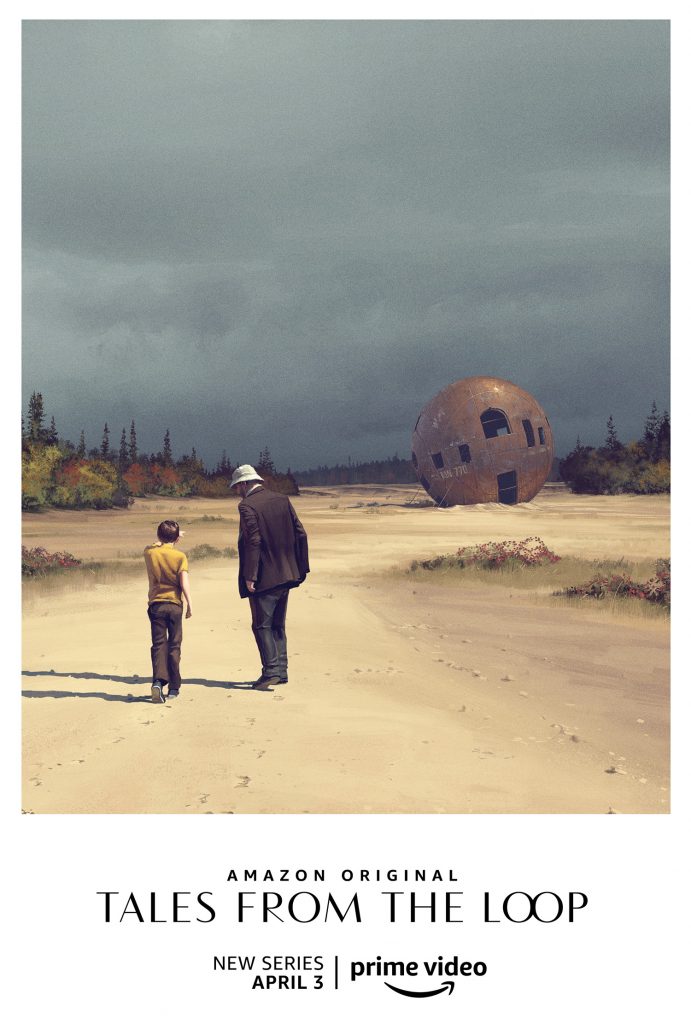 1 thought on “Tales from the Loop – What Did I Just Watch?”