American Horror Story Season 9 will be here before you know it and fans were thrilled today to get an amazing cast announcement video posted on Instagram by show-runner Ryan Murphy!

This is the first cast announcement video Ryan has done since season five. Fans are ecstatic to get some information so early on in the filming process.

American Horror Story, the anthology horror series on FX, is coming out with its ninth season in September.  Titled “1984,” this season looks like it will have a Friday the 13th vibe, complete with a creepy summer camp and 80’s aerobics fashion.

Thanks to my daughter, Cassie Entin, for writing up the following cast announcement.

After studying the video on Instagram and doing some digging, we have confirmed the main cast for AHS Season 9. Don’t worry though, there will be more special guest stars throughout the season. Ryan just likes to keep that part a surprise!

Emma Roberts
An AHS alum, we have seen Emma in Coven, Freakshow, Cult, and Apocalypse. Most of the time we see her as a bitchy character, but it looks to us from the trailer that she may not be so bad this season. Hooray!

Cody Fern
Back again for his second season of the show, Cody has become a fan-favorite after his role of Michael Langdon in Apocalypse. We’re glad to see him back in the main cast!

Billie Lourd
Returning yet again, this will be Billie’s third recurrence as a series regular. She looks like she’s got some sass this season, and we’re here for it!

Leslie Grossman
Ever since her appearance in Cult, fans have learned to love Leslie for her quirky characters, and it looks like we’ll be getting more very soon.

John Carroll Lynch
He’s back! He’s back! Known best for playing Twisty the Clown in season four, Freakshow, John will be back in the series to play some sort of… mysterious creepy guy. Or at least that’s all we can tell from the trailer.

Gus Kenworthy
A newcomer to the AHS world, Gus is actually known as a Winter Sports Olympian, and won the silver medal for slopestyle back in 2014. Looks like this will be his acting debut!

Matthew Morrison
Matthew is new to AHS, but not new to the Ryan Murphy universe. You may recognize his name as the actor that played William Schuester in Glee, another popular show from Ryan Murphy. Everyone is excited to see this addition to the cast. We missed you, Mr. Schue!

Angelica Ross
Another actress from Ryan’s circle, you may be familiar with Angelica from POSE – a heartfelt series that delves into the lives of the LGBTQ community in the 80s Manhattan era. Angelica played Candy Ferocity, and since she has made her exit from POSE, everyone wants more of her. No wonder Ryan brought her onto American Horror Story!

Zach Villa
Newcomer Zach was seen in the trailer as another mysterious man with a black coat, sunglasses, and hat. What could he be up to? Many people are speculating that this could be another portrayal of Richard Ramirez (remember him from Hotel?), as his killing sprees happened during the summer of 1984. Whoa!

DeRon Horton
Best known for his role as Lionel Higgins in Netflix’s Dear White People, he will be making his AHS debut this season too, though there isn’t much to speculate about his character yet.

Who’s Out for AHS Season 9?

Evan Peters has confirmed that he will not be returning for the ninth installment of American Horror Story. For the first time ever, he will not be spotted in a single episode this season.

It is also truly devastating to hear that Sarah Paulson will only be a guest star in one to three episodes at most. There have also been confirmations that Cheyenne Jackson and Billy Porter will not be returning for this season either.

There has been no word on Kathy Bates or Angela Bassett, though it isn’t likely we will see them this season. You never know, though. After all, we did get Jessica Lange back for Apocalypse! (And no, Jessica won’t be appearing this season either. Sorry folks!)

Tune in to FX on Wednesday, September 18th, for the premiere of American Horror Story Season 9, “1984.” You never know what surprise cast member may show up! 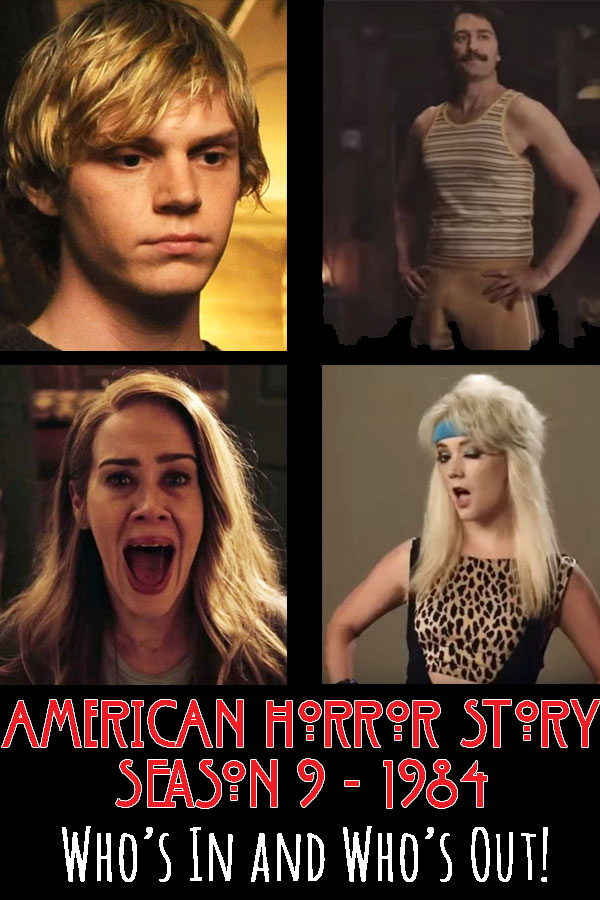