Today we’re declaring our love for Season 2 of the Netflix original series, Dark. This show takes place in the small German town of Winden, where the disappearance of Mikkel Nielsen is linked to a time-travel portal in the caves under the nuclear plant. The missing child sets four families on a hunt for answers as they unearth a mind-bending mystery.

Please subscribe to Stinger on Apple Podcasts or your favorite podcasting app. Subscribing is free and ensures you’ll be notified when new episodes are published. And if you enjoy Stinger, please rate and review us and tell your friends! Thank you for listening to Episode 50 of Stinger TV and Movie Podcast!

3:25 What we’re watching: Spider-Man: Far From Home, Spider-Man: Into the Spider-Verse, Rim of the World, Baywatch, Handmaid’s Tale.

Spoilers ahead for both seasons of Dark!

Stinger Topic of the Week: Review of Netflix’s DARK Season 2

14:00 Dark is a German mind-bending mystery drama. It’s produced, directed, and acted in German. So, unless you understand German, you’ll need to watch this series with subtitles or dubbed. We recommend watching it dubbed because it’s so complex that you’ll really need to understand the language and focus on what’s happening instead of reading.

In Season 1 (discussed on the podcast here), the mysterious disappearance of Mikkel Nielsen is linked to a time-travel portal in the caves underneath the nuclear plant. An explosion in the plant in 1986 may have resulted in the opening of a wormhole through time. Every 33 years, the cosmos line up in exactly the same place, so the wormhole allows a traveler access to either 33 years in the past (1953) or 33 years in the future (2019).

A young man named Jonas unravels the mystery after discovering his father – who committed suicide in 2019 – was really Mikkel who traveled back in time to 1986 and grew up to become Michael Kahnwald. Michael leaves clues for Jonas to find his way to the wormhole and at the end of S1, Jonas finds himself thrust into an apocalyptic future.

Fun fact: Season 2 premiered on Netflix on June 21, 2019 – which is the day that Michael Kahnwald committed suicide on the show, kickstarting the events of the series.

Season 2 of Dark Explains a Lot… Sort Of.

In Season 2 we learn that time is not linear and there are various versions of time-travel machines in addition to the portal in the cave. Here’s an incredible visual created by Reddit user /ncarnold.

26:30 On the podcast, we discuss some of the scientific elements of Dark such as the Higgs boson particle, black holes/wormholes, and the concept of the bootstrap paradox.

Why do we love this show so much? It offers impeccable writing, picks up every thread it leaves hanging, and really makes you think.

The Families of Dark

37:08 There are four families in Netflix’s Dark that are intimately connected. Here, we’re breaking down each character to help you cut through the confusion. Listen to the podcast for our full discussion! And check out this post on sorting out the families and timeline in Dark.

Mikkel/Michael: Once Mikkel Neilsen, but got swept back to 1986 and adopted by Ines. He grew up as Michael, married Hannah, had Jonas, then killed himself in 2019. Traveler Jonas tried to stop him, but Claudia intervened.

Hannah: Jonas’s mom. Loves Ulrich (has since she was a girl), but left him to rot in a psychiatric facility because she realized he never loved her. Stayed in 1953 to start a new life. Wonder what kinda trouble that’s gonna cause?

Jonas: Son of Michael & Hannah. Dated Martha Neilsen, then finds out Martha is actually his aunt. At the end of S1 Jonas travels to 2052 to an apocalyptic future. In S2, he discovers the God Particle in the power plant, temporarily stabilizes it, and travels back in time to 1921 where he learns he eventually becomes the man behind it all, Adam, who wants to destroy everything and create a new world. Mind=blown.

Ines: Nurse who adopted Mikkel/Micheal when he showed up in 1986. Drugged him with sleeping pills regularly. Why? To control/keep him? Was he having nightmares or remembering things?

Ulrich: A detective who worked with Charlotte. In S1, having an affair with Hannah, then his son Mikkel disappears. His brother Mads disappeared in similar fashion in 1986, which drives him to find Mikkel at all costs. While investigating what happened to Mikkel, Ulrich realizes Mads is the boy who is found dead in the woods in 2019. Ulrich travels back in time to 1953 through the caves. In 1953, he is arrested for the deaths of two other young boys. In Season 2, he’s been in a psychiatric hospital from 1953 – 1986.

Katharina: Ulrich’s wife and principal of local high school. In 1986, Hannah files a false police reporting accusing Ulrich of raping Katharina in order to drive them apart, then implies to Katharina that Regina Tiedemann reported her. After Ulrich and Mikkel both go missing, Katharina is determined to find them and is last seen opening the passage in the Winden caves at the time of the apocalypse in 2020.

Martha: Daughter of Ulrich/Katharina. Was Jonas’s girlfriend prior to his dad committing suicide. But she’s also his aunt. And apparently – as seen in the finale of S2 – she’s also a badass time traveler from an alternate world. She shoulda stayed in that damn bunker.

Magnus: Son of Ulrich/Katharine. Dating Franziska. Kinda just the “older bro” character. Feels responsible for Mikkel’s disappearance. We expect him to have a bigger role next season.

Egon Tiedemann: Police officer and father of Claudia. Investigated disappearance of Helge in 1953 and ultimately arrested future Ulrich. In 1986, also believes Ulrich is responsible for his brother’s disappearance, and arrests Ulrich for raping Katharina. In 1987, he has cancer. He discovers time travel is possible and tries to talk to future Ulrich in the psychiatric ward. Accidentally killed by Claudia.

Claudia Tiedemann: First woman to run the nuclear power plant in Winden. She accidentally causes her father to crack his head open in 1987, but doesn’t help him so she can protect the God Particle from being discovered. She grows into the “White Devil” –  Adam’s main antagonist – and eventually becomes a mentor to the young version of Jonas, whom she hopes will wage war on himself and stop Adam from destroying the world. She is killed by Noah in 1954.

Regina:  Neglected daughter of Claudia Tiedemann. Regina is the mother of Bartosz, wife of Aleksander/Boris. Ran the only hotel in Winden (was shut down). Has breast cancer and is undergoing treatment.

Aleksander/Boris: Aleksander is married to Regina, father of Bartosz. Was born Boris Niewald, he arrived in Winden in 1986 and stole the identity of Aleksander Kohler after being involved in a still-unsolved double murder in Marburg. Aleksander gets a job at the nuclear power plant, which is run by Regina’s mother Claudia at the time. In 2019 he is in charge of the plant. In 2020, Investigator Clausen, the brother of the real Aleksander accuses him of identity theft.

Bartosz: Son of Regina & Aleksander. Dated Martha while Jonas was being treated for post-traumatic stress after his father’s suicide. He was recruited by Noah after Helge dies. He learns how to use the time device, but it’s not clear exactly what he does for Noah. His friends find him in the cave and force him to show them the time machine.

Charlotte Doppler: Raised by H.G. Tannhaus, the clockmaker and creator of the time travel device. Mother of Franziska and Elisabeth, wife of Peter. Works in law enforcement with Ulrich. In Season 2, it’s revealed her father is Noah and her mother is Elisabeth — her own daughter. WHAT?

Peter: Therapist, son of Helge. Married to Charlotte, but likes to mix it up with Benni – the trans man he regularly fools around with. He witnesses the body of Mads Nielsen fall through a hole in time and space in the bunker in 2019, after which he calls Tronte Nielsen, who moves Mads’ body to the woods where Ulrich Nielsen and Charlotte find it. Also survives the apocalypse in the bunker.

Elisabeth: Youngest daughter of Charlotte and Peter. She is deaf. One day, while walking home in the rain, Elisabeth meets the mysterious stranger Noah – who ends up being both her future husband and the father of her mother. She is one of the few in the bunker who survives the apocalypse in 2020, and rises to become a leader of sorts in the apocalyptic future of 2053.

Franziska: Daughter of Charlotte & Peter. Girlfriend of Magnus. Expect her to have a bigger role next season.

Helge: Only son of the rich and powerful Greta and Bernd Doppler, who ran the nuclear power plant. He briefly went missing in 1953, when he traveled forward through time to 1986 after being attacked by the 2019 version of Ulrich Nielsen, who thought if he killed Helge in 1953, Mikkel would never go missing in 2019. He returns home in 1954. In 1986, Helge was manipulated by Noah, who told him to kidnap young children to use for experimentation. In 2019, Helge traveled back in time to 1986 in an attempt to stop his younger self. He dies there after ramming his car into the 1986 version of himself, but his younger self survives.

Noah: Noah is a priest(?) working with Adam to bring about the apocalypse and create a new world without time. Father of Charlotte. He is killed by his sister Agnes in 1921.

Agnes: Sister of Noah. Rented a room from Doris Tiedemann and they had an affair. Her son is Tronte = father of Ulrich = father of Mikkel/Michael = father of Jonas. She is working with Adam (Jonas) and is also his great-great-grandmother.

Questions We Want Answered After Season 2 of Dark

Dark seems to be telling us that all events that have happened and will happen are always existing in a never-ending cycle.

OK. But we still have questions.

Will There Be a Season 3 of Dark?

The creators of Dark said they always planned it as a trilogy series. The third, and final, season is shooting now and will consist of eight episodes. 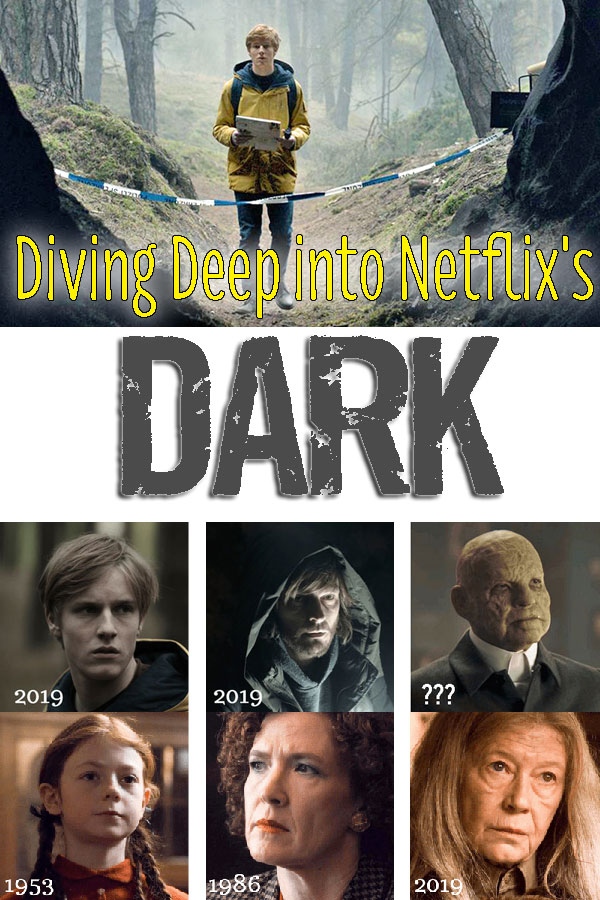 What Should I Watch Next?

Sign up for our email updates and you'll always know what to watch next!

We Want to Hear From You!

Leave a message on our voicemail! We want to hear your feedback and ideas for future podcasts. We might even play your comment on our next podcast. Give us a call at 315-STING-TV (315-784-6488).

How to listen to a podcast

It’s easy and all the cool kids are doing it. Here’s how to get started listening to a podcast.